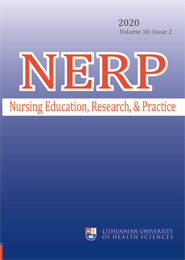 The aim of this study was to analyze trends for developing chronic postoperative pain in the early postoperative period by comparing the effect of two different methods of analgesia after cardiac surgery.

Methods. Patients were divided into two groups (group I and group II) in relation to the type of analgesia during and after the surgery. Group I received systemic analgesia, while group II had multimodal analgesia. The study was performed at the Hospital of Lithuanian University of Health Sciences Kauno klinikos, Department of Cardiothoracic and Vascular Surgery from September, 2019, until January, 2020.

Results. In total, 122 patients participated in the study. Chronic pain was found to develop in less than one third of the patients (29.5%, n = 36). Group I had slightly higher rates of pain level, although different analgesia methods did not affect the rate of chronic pain. The patients over 75 years of age, obese and overweight were at least 3.5 times more likely to develop chronic pain than the patients younger than 50 years and those with normal weight. There was no significant difference between patients’ gender or type of surgery and the development of chronic postoperative pain.