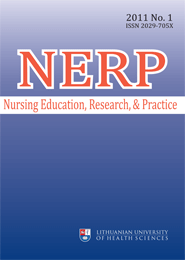 Development of the Nursing Profession in Pre-War Independent Lithuania (1918–1939): A Comparison Between Past and Present

INTRODUCTION. For Lithuanian nurses, knowledge of their own history should help them to better understand the origins of their discipline and the social and political forces that have shaped it. This article presents the evidence and discussion of changes in Lithuanian nursing that reflected the pre-war period from 1918 to 1939, which was then compared and contrasted to the present. METHODS. Historical inquiry was used to research and analyze written nursing history in Lithuanian libraries, archives, and smaller repositories. Research materials included documentary sources, books, and journals pertaining to nursing education and practice. Findings. Between World War I and World War II, the Lithuanian nursing profession grew and, with some political maneuvering, was able to run its own affairs. Although primarily male physicians were in positions of authority, the career of Kazė Vitkauskaitė indicates that women could rise to administrative levels. Nurses were striving to improve both their training and working conditions through verbal discussions and professional organizations. By 1935, Lithuanian nurses were active and able to discuss health care issues locally, nationally, and internationally. They continued to refine their profession and struggled for increased recognition. However, increasing political tension in Europe from 1935 to 1939 began to slowly encroach upon the activities and plans of Lithuanian nurses. CONCLUSIONS. Over the last decade, Lithuanian nursing has been rapidly evolving and racing to reclaim its place among nursing in Western countries. Historical inquiry revealed that several trends in asserting the nursing profession continue. While conditions for nursing students have improved, the working conditions for nurses are still suboptimal.